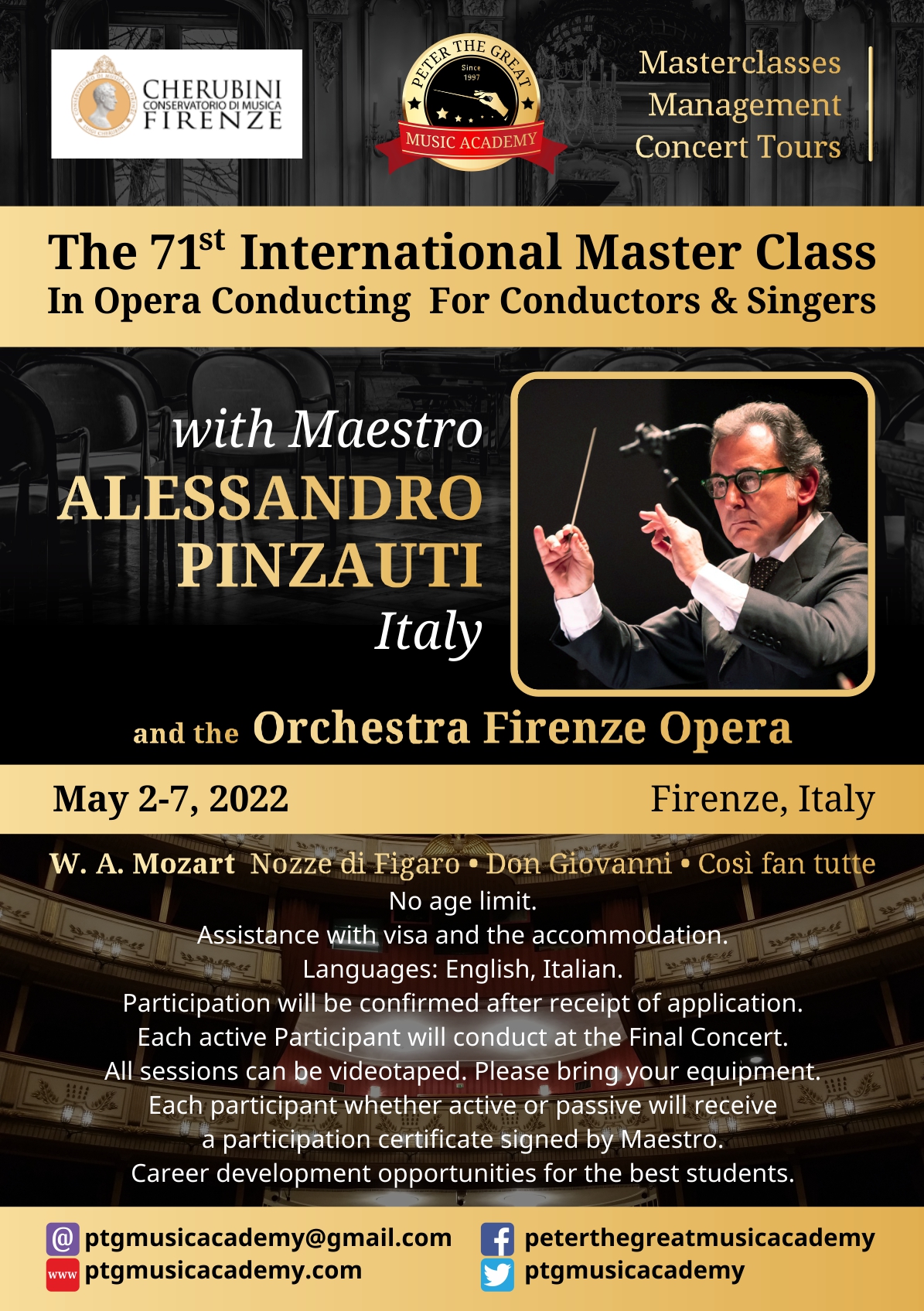 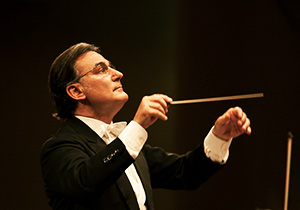 Info about (further on this page)

May 2, Monday, 1st day: morning with piano and singers (5 hours)

Address of the Master Class:

Alessandro Pinzauti is an Italian conductor and lecturer, tenured at the Conservatorio Luigi Cherubini in Florence in the Orchestral Conducting department, the only chair in Tuscany.

Born in Rome into a family of Florentine musicians, he completed his humanistic and musical studies in Florence, graduating in Modern Literature with Giorgio Luti and obtaining a diploma in violin under the guidance of Sandro Materassi. He studied conducting with Franco Ferrara at the Accademia Musicale Chigiana in 1979 and 1980, and concurrently at the Scuola di Musica di Fiesole with Piero Bellugi. At a very young age he attended lessons in score analysis with Luigi Dallapiccola and later with Romano Pezzati and Luciano Berio, who made him debut as conductor in 1981 in Radicondoli.

In 1985, he was Riccardo Muti's musical assistant in the production of Macbeth at the Teatro San Carlo in Naples. In 1987, he took the Orchestra della Toscana on tour to Dresden, where he was one of the most frequent guest conductors; in 1988 he made his debut in London with the London Philharmonic Orchestra and the following year at the Lyric Opera House in Chicago with Rossini's Il Barbiere di Siviglia. In 1991, he conducted Mascagni's L'amico Fritz in Livorno on the occasion of the centenary of the opera's first performance. He has also participated in the Venice Biennale, the Ravenna Festival, the Maggio Musicale Fiorentino and the Cantiere Internazionale d'Arte di Montepulciano.

Since 1985, he has been professor of conducting at the "L. Cherubini" Conservatory of Music in Florence and from 1994 to 1997 he was permanent conductor of the Orchestra Giovanile Italiana, with which he made his debut in Vienna in 1995.

In 1998, with the help and support of Riccardo Muti, he founded the Camerata Strumentale "Città di Prato" with which he planned, together with Aldo Bennici, vicepresident and artistic director of CIDIM, two tours in South America in 2001 with a cycle of ten concerts in Brazil, Chile and Argentina and again in 2003 with a programme entirely in Rossini's style. In 2008, again with CIDIM, he planned and conducted a series of concerts in Italy with the Camerata Strumentale "Città di Prato" with the participation of violinist Boris Belkin.

He regularly collaborated with Teatro Verdi in Pisa from 1997 to 2010, where he conducted Il barbiere di Siviglia by Paisiello and Rossini, Norma by Bellini, Il turco in Italia, L'Italiana in Algeri, directed by Toni Servillo, and La Cenerentola by Rossini.

In the winter opera season of 2000 he conducted Vincenzo Bellini's La sonnambula at the Teatro del Maggio Musicale Fiorentino, directed by Federico Tiezzi, and in October of the same year he made his debut with Norma at the Teatro dell'Opera in Rome.

In November 2002 he conducted a new production of Le nozze di Figaro at the Teatro di Pisa, Prato and Siena with the Camerata Strumentale "Città di Prato", followed in 2005 by Don Giovanni and in 2006 with the Orchestra della Toscana, Così fan tutte to complete the trilogy by Mozart and Da Ponte.

He has performed in world premieres of works by Vacchi, Pezzati, Pennisi, Luciani, Tutino and Dall'Ongaro. In the 2004 season of the Camerata Strumentale di Prato he conducted Beethoven's Ninth Symphony and Britten's Phaedra with Monica Bacelli.

With the Camerata Strumentale Città di Prato and the Athesis Chorus he recorded the Missa in tempore belli and Haydn's Te Deum.

In addition, Rossini's Il Turco in Italia, recorded live at the Teatro Verdi in Pisa, and with the Camerata Strumentale "Città di Prato" Haydn's Die Schöpfung, an anthology of overtures, a CD dedicated to the works of Luigi Cherubini, Mozart's Concerto K466 (soloist Pietro De Maria) together with Cajkovskij's Suite for Orchestra No. 4 "Mozartiana", and Haydn's Die sieben letzten Worte unseres Erlösers am Kreuze. 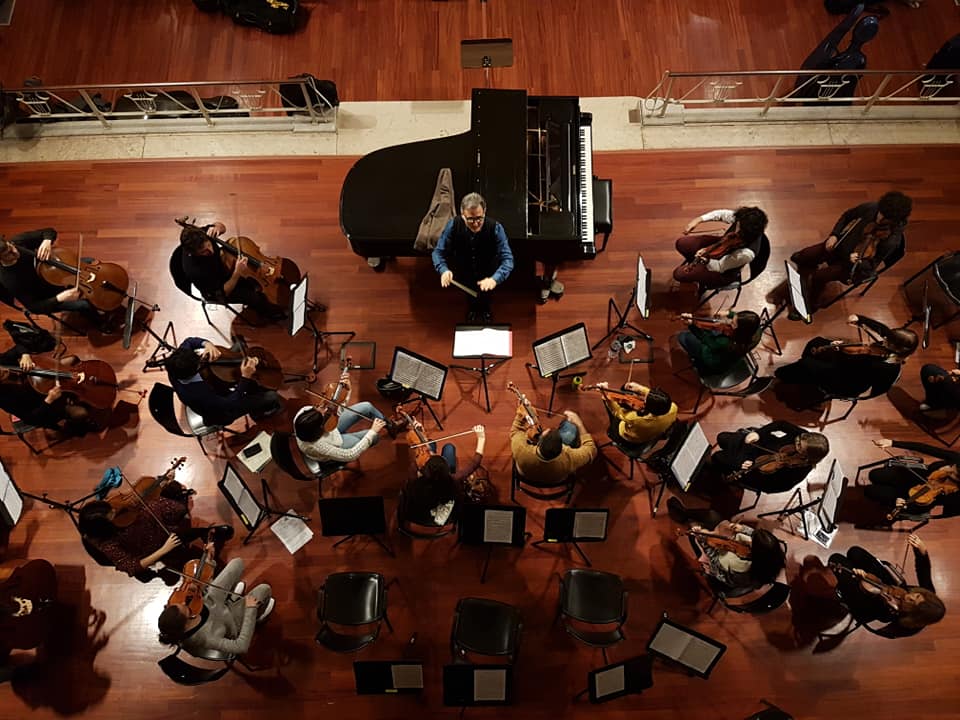 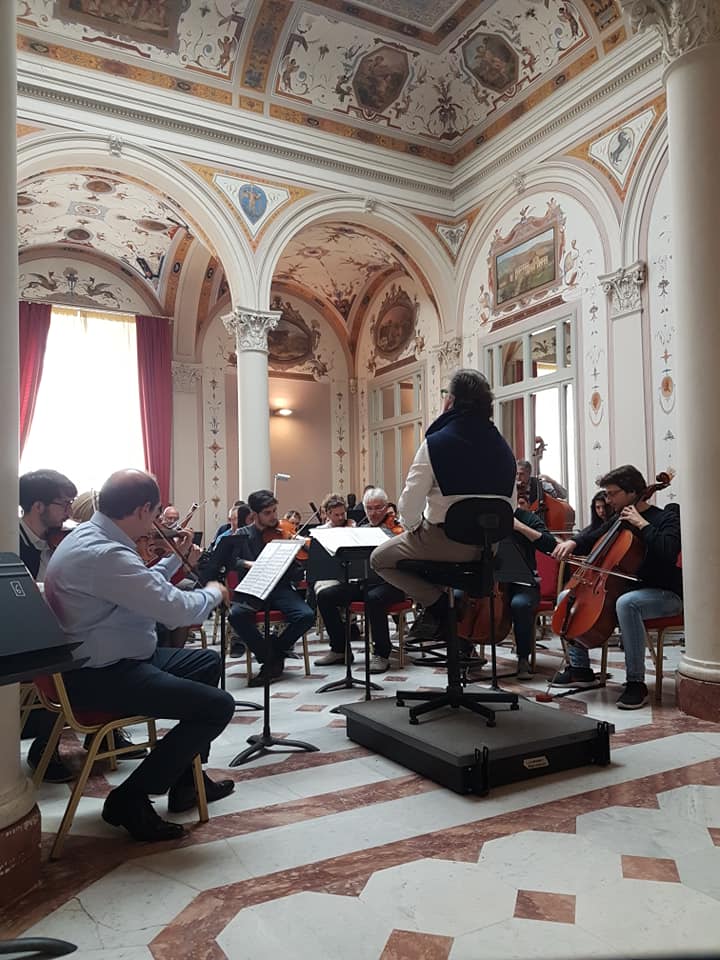